The Story behind the Jolly Boys 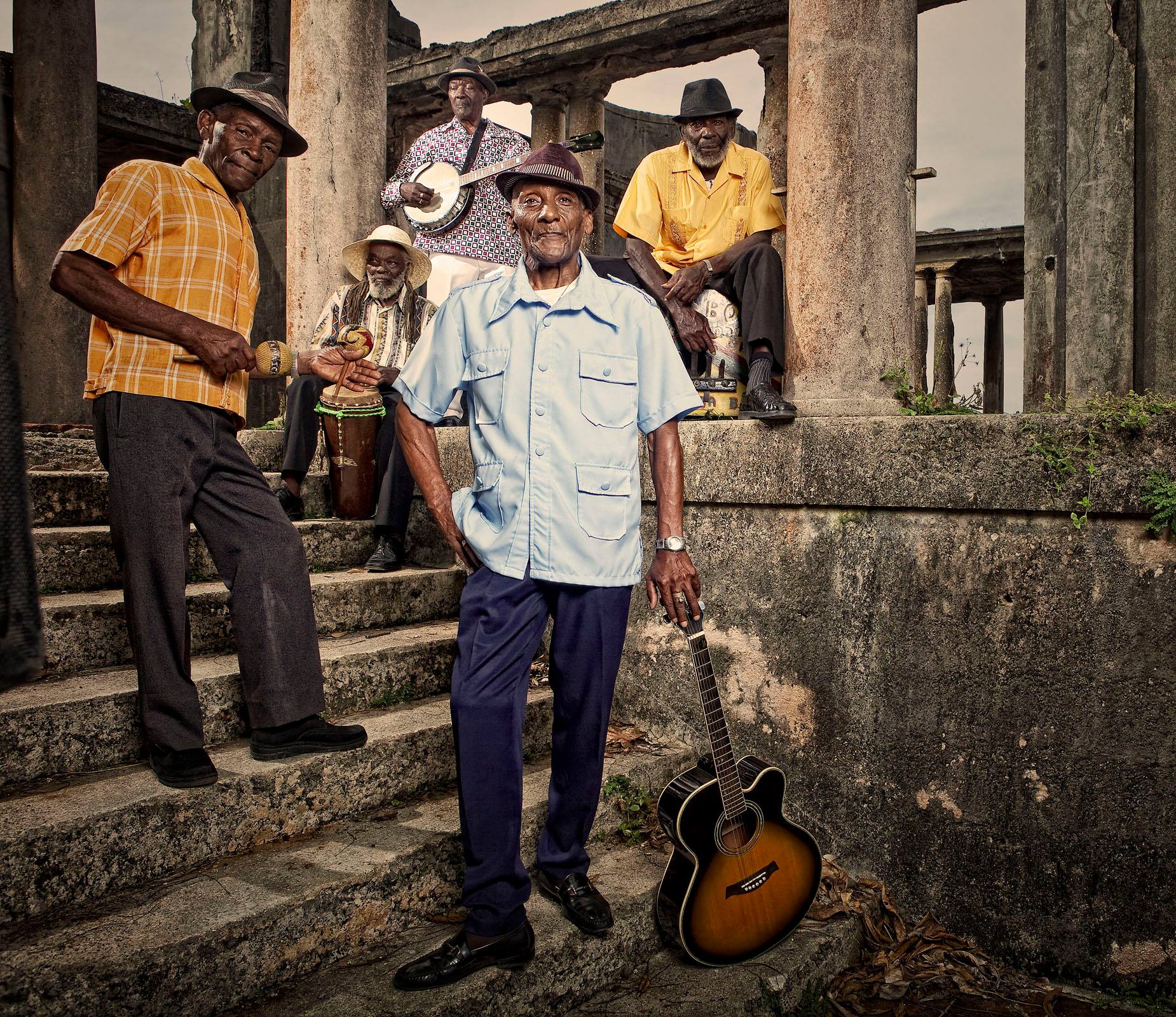 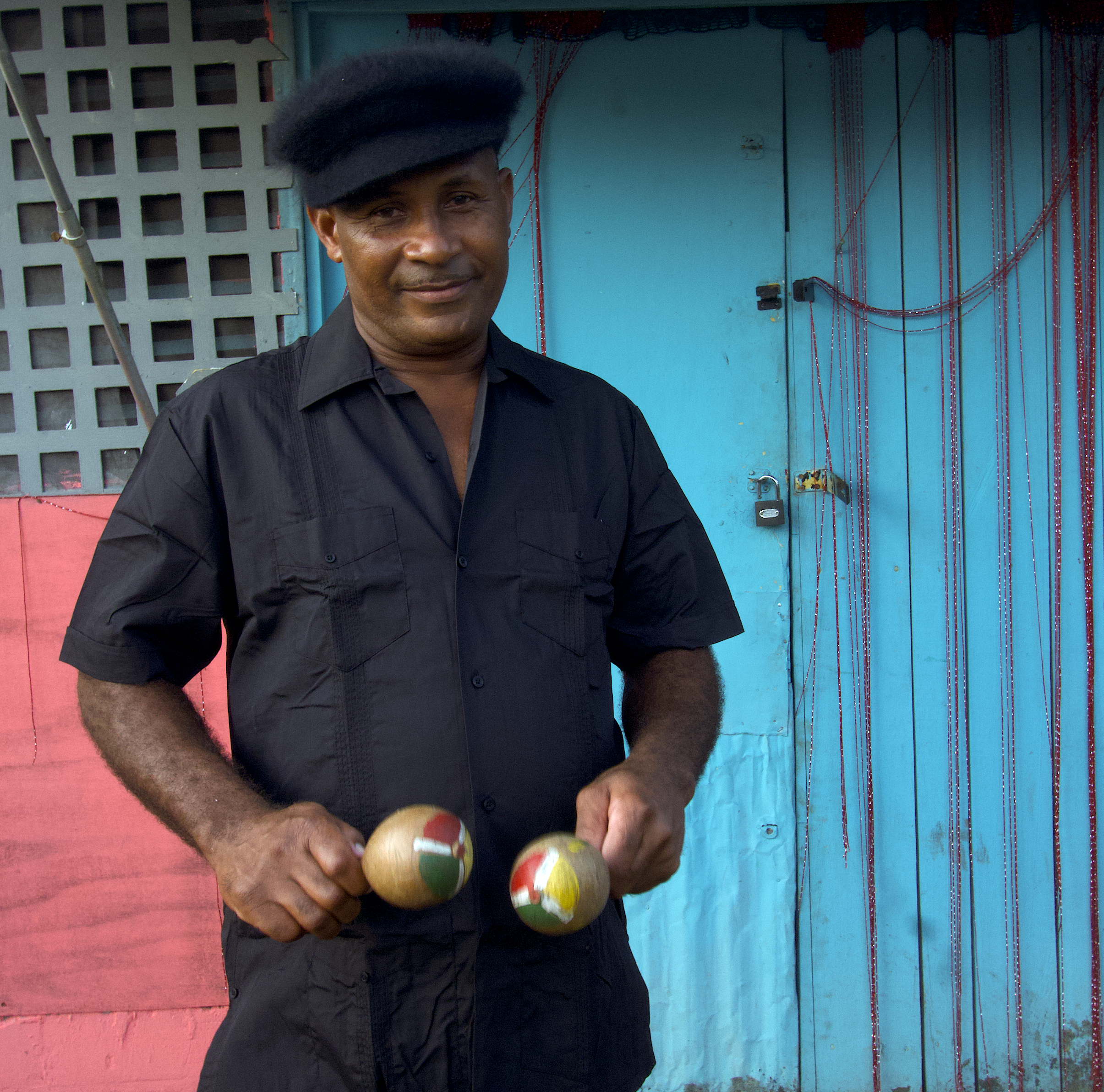 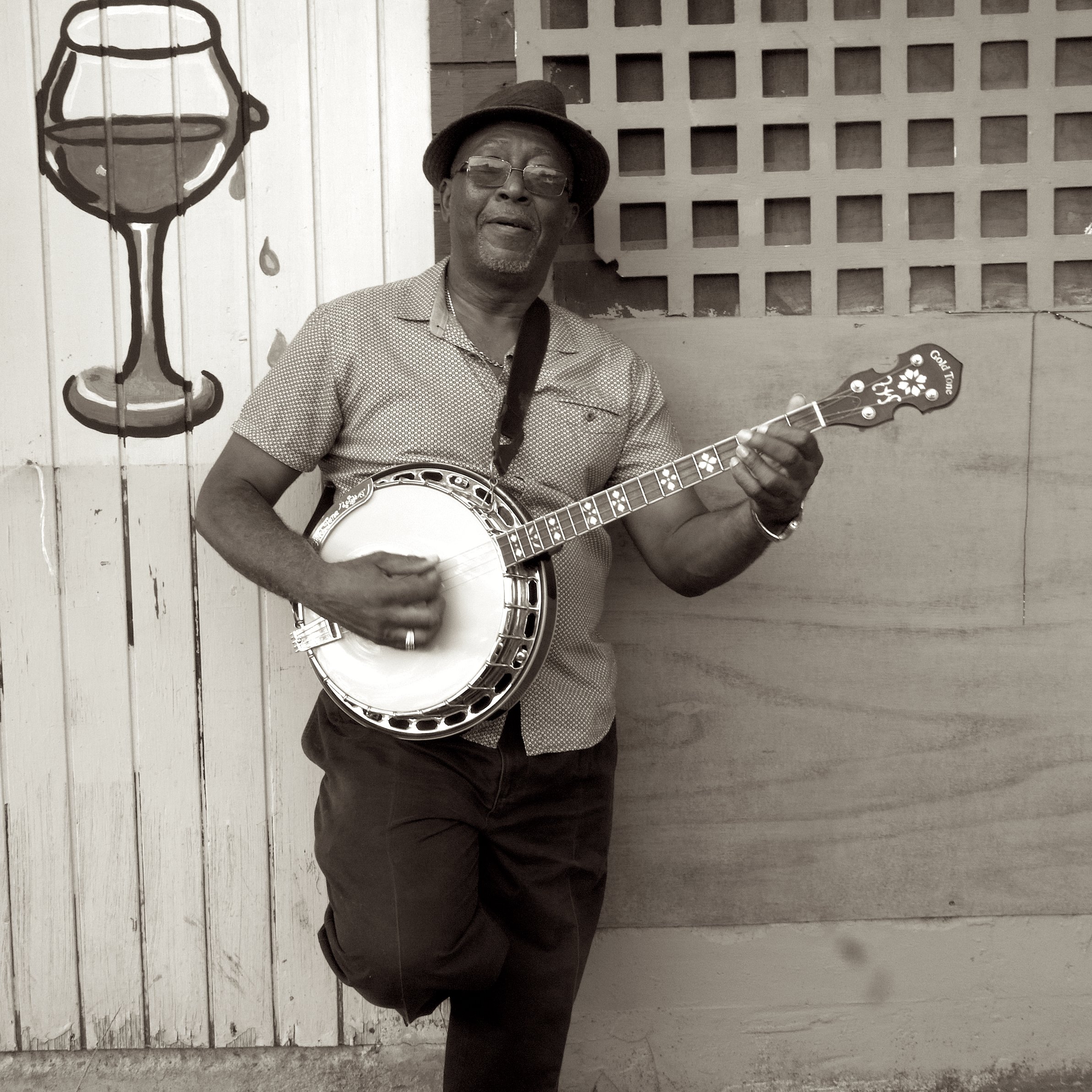 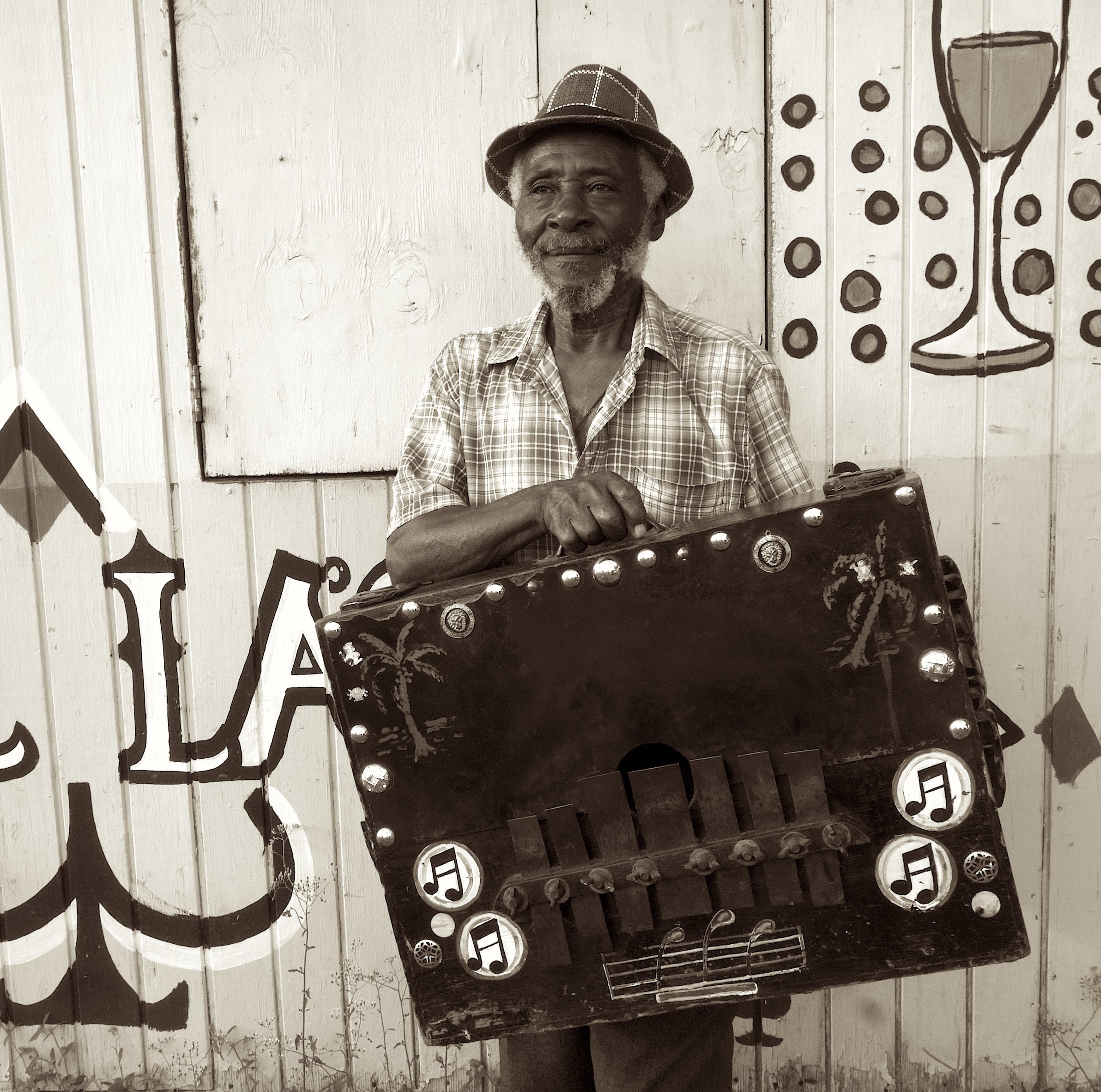 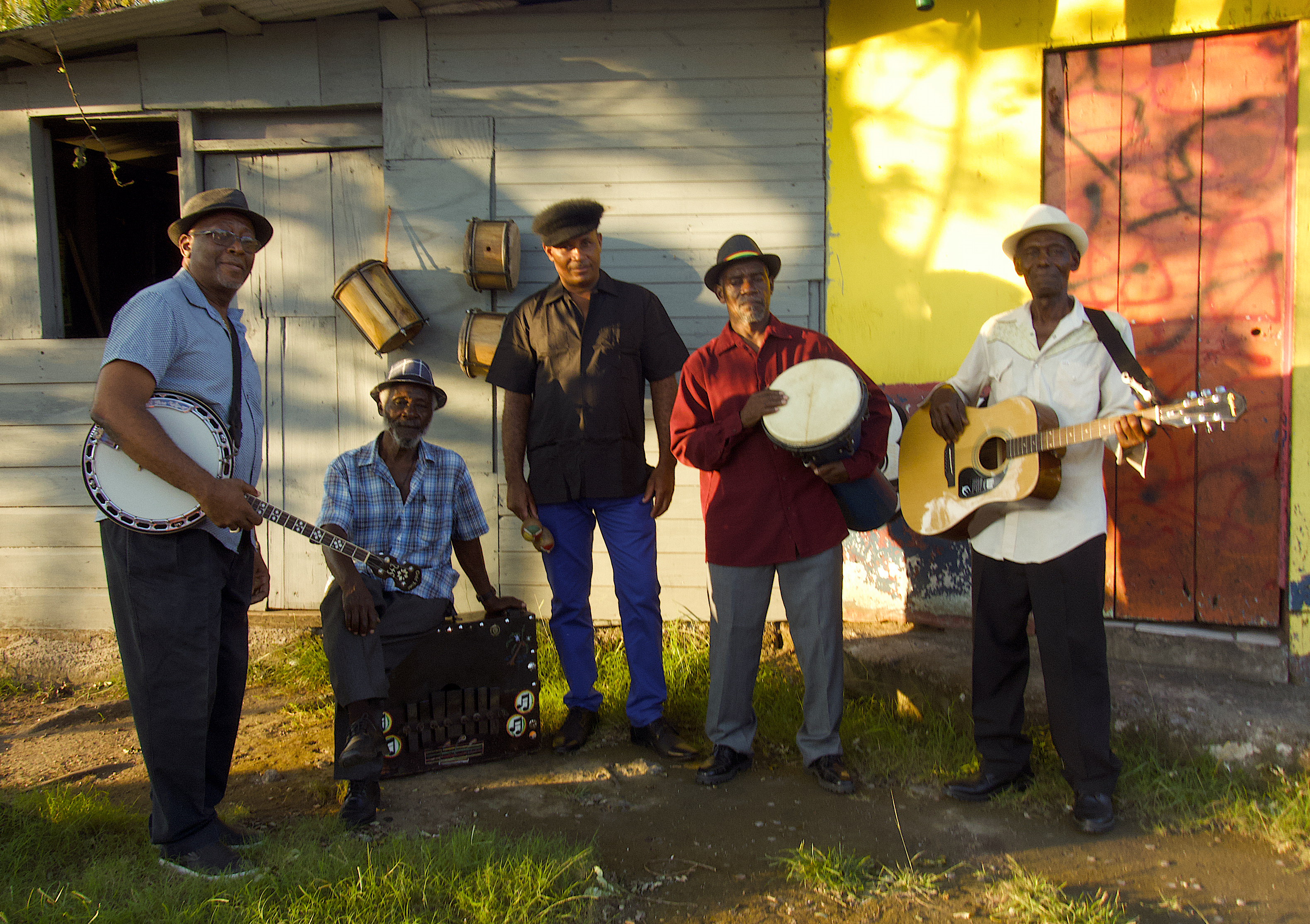 For nearly sixty years, the Jolly Boys and their tradition have persevered, largely due to their ability to draw from the community of original musicians who have been in the group’s orbit since the start. The “foundation” group through 2009-2010 included Joseph “Powda” Bennett on maracas, Derrick “Johnny” Henry on rumba box, Allan Swymmer on percussion, and Egbert Watson on banjo, with Albert Minott singing lead and playing guitar. In 2010, With new members Lenford “Brutus” Richards on Banjo and Dale Virgo on percussion, the group produced it’s new sound and started to take yet another generation–and their bacchanalian excesses–by storm. In 2014 they toured extensively all over the world, the highlight of which was 25 Arena shows as opening act for Sade.

Sadly Egbert Watson passed and Alan Swymmer had to drop out due to a stroke, then eventually Joseph Bennett and finally Albert Minott walked the long road in 2017.  Most recently Derrick ‘Jonny’ Henry (05/07/1939 – 13/03/2019) joined the other foundation member Jolly Boys on the other side. Jonny was the oldest playing member of the original Jolly Boys Mento Band, he had been working part time in the kitchens of the Titchfield hotel in Port Antonio when founder member Moses Deans asked him to join the band in 1956, he was just 16 years old and played maracas, congo drum and did a little dancing. Jonny traveled the world extensively with the group, he loved the touring and the crowds loved him. When interviewed he once said about touring ‘I just wanted to see what was going on’, well he saw a lot especially in the more recent incarnation of the band where he was affectionately called ‘The History Man’. Jonny passed quietly at his home in Port Antonio, Jamaica. The band continues Jonny’s legacy.

Out of these ashes The Jolly Boys have risen and have once again returned to their original classic mento roots with the addition of Larry Christie ( who just happens to be the step son of original member Lynch from the 1950’s), Noel Howard has return on guitar and Carl Thomas at a sprightly 60 years old has taken over lead vocals – the Jolly Boys are truly timeless and will be touring in Europe through the summer of 2019.

The Jolly Boys quickly rose to local prominence in the 1950s as the house band for the Rat Pack’s Jamaica chapter, chaired by the swashbuckling enfant terrible, Errol Flynn. Singing songs of double entendre and ribaldry to those in search of escape and excess, the group served as Port Antonio’s go-to band for thirty years. Being “discovered” by a new generation of world music aficionados in the late 1980s meant that the Jolly Boys could take their musical party on the road. Several album, dozens of countries and thirty years since, the Jolly Boys have become the most recognizable mento band in the world.

Now, the Jolly Boys are back, reinvigorated with a revolutionary new sound. In early 2009, Jon Baker, founder of Gee Street Records and one-time leader of the A&R; team at Island Records in NYC, held a recording session at Geejam studios to capture some of the Jolly Boys vintage material. He was looking for the rebel mento–the punk rock of its day–where singers sang frankly about sex and wrote biting commentary about relevant social issues. The Jolly Boys delivered, but it led to a fresh creative idea: why not dip into the rock repertory, take the songs that resonate with mento’s raucous history and give them a different vibe. Baker, together with his long term friend and creative partner Mark Jones from Wall of Sound, worked together and chose tracks from artists like the Clash, the Stooges, the Stranglers and Amy Winehouse. They fit the mento vibe so naturally that work on the new project began immediately.

Over the next several months, the group worked tirelessly with Dale Virgo, Baker’s co-producer, on a set of innovative arrangements and modern beats to complement and contemporize an older sound defined by banjos, maracas and rumba boxes. To bridge the narrows between the two styles, Baker brought in mento scholar and banjo driver Daniel Neely as the project’s music director. In addition, Jamaican saxophone legend Cedric Brooks added both his unique musical insight and his horn to the project. The entire endeavor was documented by filmmaker and director Rick Elgood (One Love, Dancehall Queen, Westway to the World), whose docudrama about the Jolly Boys past, present and future is currently in production. The result of these efforts is the Jolly Boys’ new album, Great Expectation, the birth of modern mento.

The well-seasoned and ever energetic Jolly Boys thrash out this new mento sound with as much heart and flex as any contemporary performer. Lead singer Albert Minott’s saturated vocals, natural retro chic stylings and limitless charisma convey an uncommon originality and musical creativity that is entirely his own.

Great Expectation was recorded at Geejam Studios, a residential recording studio and hotel, in Port Antonio, Jamaica. The album and live shows received rave reviews. The video for Rehab, featuring Albert Minott (with a cameo by Patrice Flynn, Errol’s wife), was filmed at the Seaview Entertainment Centre, Limbo Lounge and Pat’s Rum Bar in Port Antonio by Rick Elgood.

Mento was the music of the Jamaican dancehalls before ska, rocksteady and reggae came along. A people’s music typically played in the countryside on acoustic–often homemade–instruments, it dates to the late 19th century. Its lyrics often dealt with rude or slack topics, or addressed the social issues of the day. Although often confused with calypso (largely because calling it “calypso” was a handy way of marketing it to tourists who didn’t know any better), it has a rawness and rhythmic feel that is uniquely Jamaican.