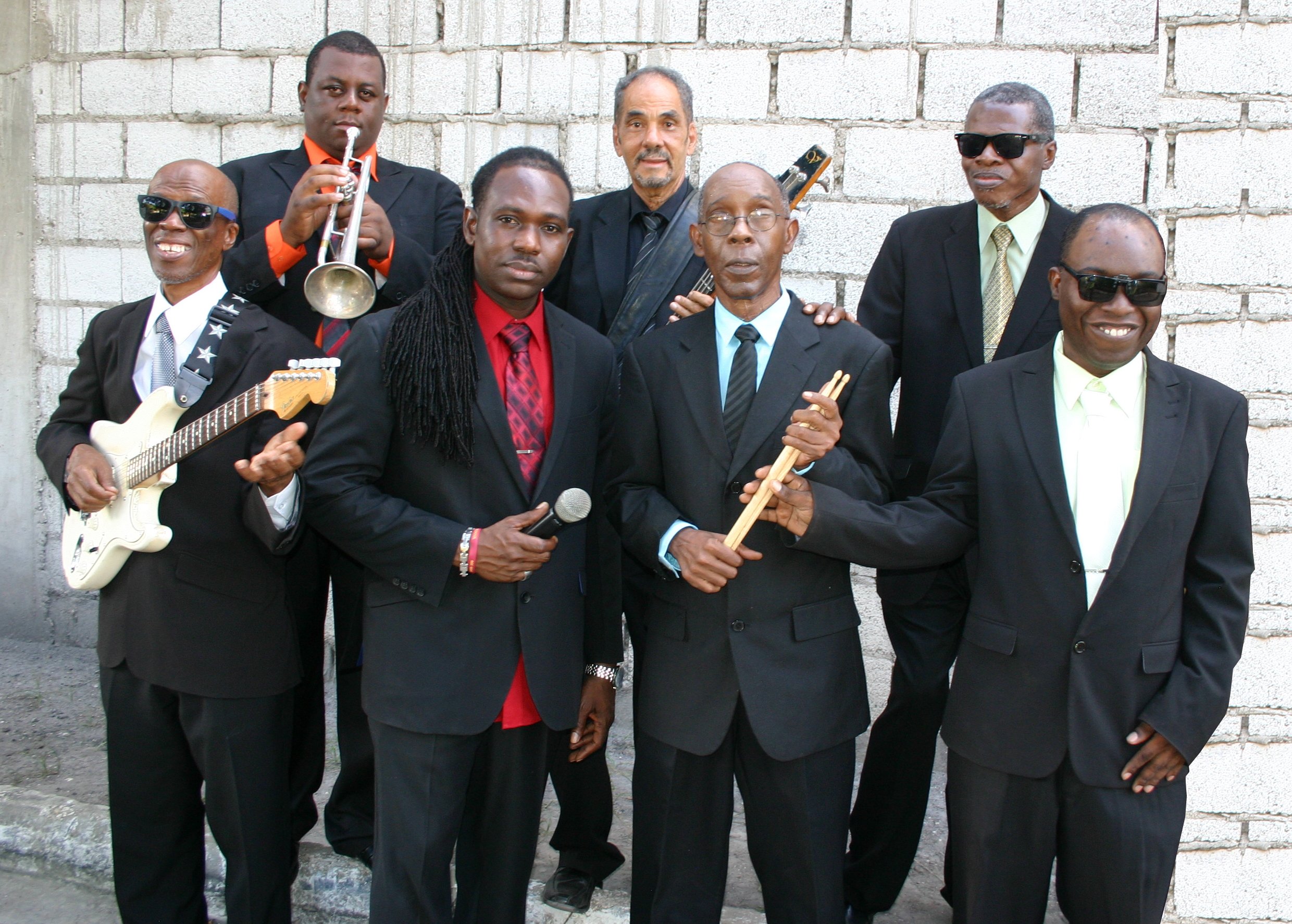 Fab 5, formed in 1970, is Jamaica’s pre-eminent popular band, whether measured by record sales at home, hits on the charts, frequency of engagements or major awards won over the years.

They backed Johnny Nash on all the reggae cuts comprising most of his platinum album “I Can See Clearly Now”. Two singles from that album, “Guava Jelly” and “Stir It Up”, established Bob Marley as a major songwriter on the international scene.

Fab 5 have enjoyed an endless succession of hits in Jamaica, the Caribbean, Central America and the “ethnic” markets of North America. In their early years such songs as “Chirpy Cheep”, “Shaving Cream”, “Oh, Dad” and “Love Me For A Reason”, and their musicality and showmanship made Fab 5 the rage on the dance and show circuits.  Since then they have been kept on top by the likes of “Yu Safe”, “Ring Road Jam”, “Feeling Horny”, Asking for Love”, “Computer Mad”, “What The Police High Command Can Do”, “Jamaican Woman”, “Psalms”, “All Night Party”, “Mini”, “Sweat”, “Don’t Wear None”, “Freeze”, “Good Buddy”, “Mango” and their “Live” series.

Their twenty-eight albums and 1 box set have been as successful as their singles, and their multi-award winning soca album “Yu Safe” was probably the most popular album produced in Jamaica in the decade of the ’80s. A CD of some of their biggest hits – “Fab 5 Greatest Hits” has been released along with five of their newest CD albums – “Good Buddy,” the massively successful “Fab 5 Live – The Ultimate Vintage Jamaican Party Mix … Part 1” and the equally successful follow-ups “…Part 2”,“…Part 3, …Part 4” as well as the Box Set which includes all four discs.

Their soca smash “Shape” is still very popular and the band’s versatility is proved by “Dugu-Dugu” their all-reggae release and the preceding all-ska album “Ska Time”. The late noted musician and journalist Sonny Bradshaw had said of Fab 5 that they are the only Jamaican band still playing authentic ska. The 2012 release from the band, a live tribute to Jamaica 50, “50 Years of Jamaican Music 1962- 2012”, sold quickly and sold well. Their 2016 album “Face to Face” , featuring collaborations with top Jamaican and Caribbean artistes like Beres Hammond, Marcia Griffiths, Queen Ifrica and Richie Stephens is doing well on the download scene.

The busiest band in Jamaica, Fab 5 are in great demand not only for concerts and dances but also in the studio where they are leading creators of commercial jingles for radio and television, dominating the airwaves and earning a string of prestigious awards, including four golden microphones. They have their own recording studio (Stage Studio) and record label and distribution company (Stage Records). They have been the chosen band for almost every national and state occasion since the mid-1970s. In 2003 Fab 5 received the Prime Minister’s Award for Excellence in The Performing Arts for its services to Jamaican music and in 2015 they were given an award for their contribution to Jamaican music by the Ministry of Culture. While their most recent national award was being named one of only 10 recipients of the Reggae Gold Honour award presented by the Ministry of Culture in a glittering March 2019 ceremony. 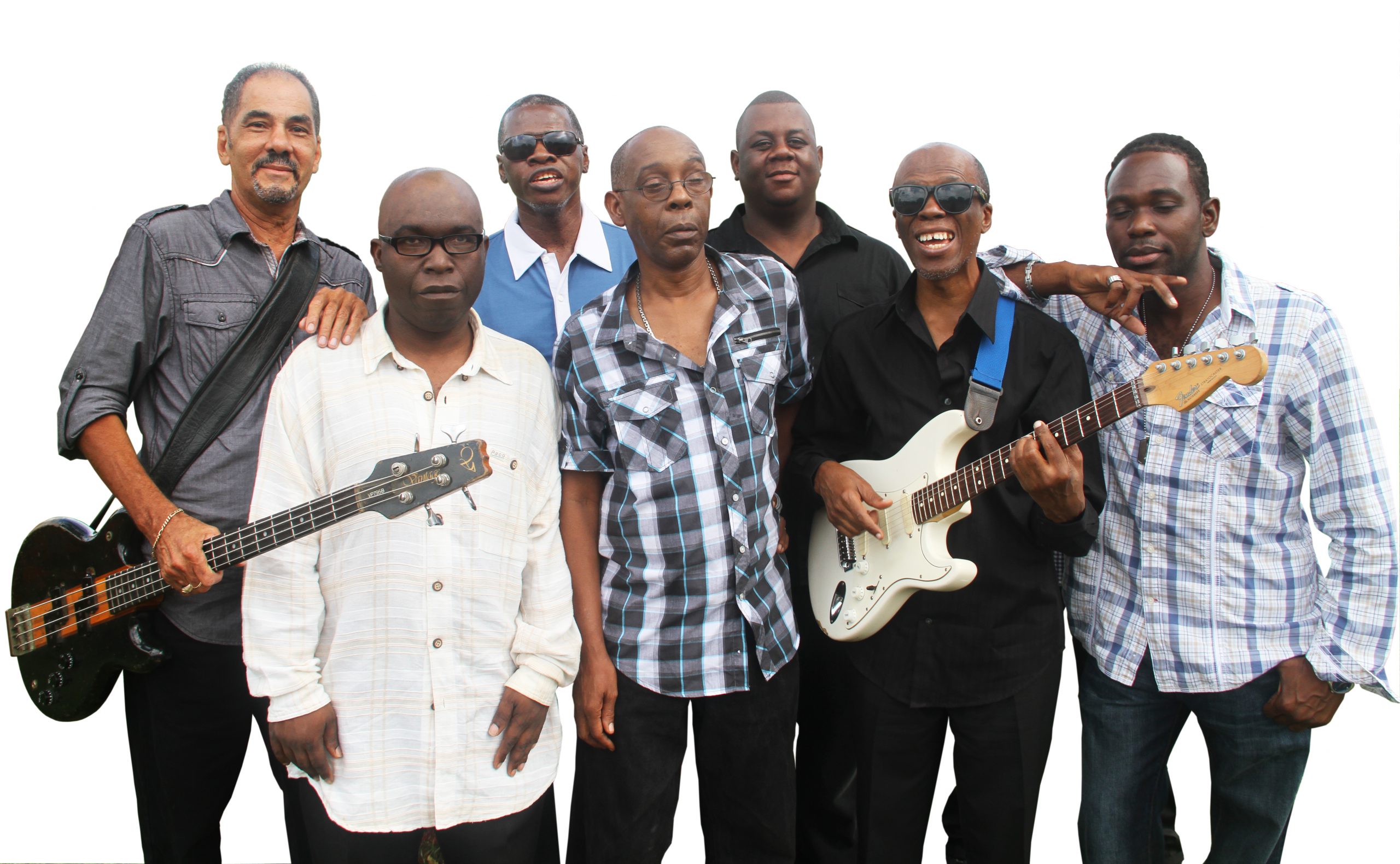 They have taken their authoritative brand of Jamaican music all over the world. They have shared bandstands with many of the great and famous names of modern popular music, including: Ray Charles; Dizzy Gillespie; the Grateful Dead; Rick James; Linda Ronstadt; the Neville Brothers; Roberta Flack; Fats Domino; Peter, Paul & Mary; Joe Jackson; The Chi-Lites; Skeeter Davis (with whom they were working on a recording project at the time of her death); the Drifters; Miriam Makeba; Bob Marley; Jimmy Cliff; Chuck Jackson; The Mighty Sparrow; Aretha Franklin; Gladys Knight; Harold Melvin & The Bluenotes; Jerry Butler; the Manhattans; Ray Goodman & Brown; and the Delphonics. They have performed at the Kool Jazz Festival and the New Orleans Jazz Festival and for Japansplash and have entertained a live audience of one million at an anti-nuclear concert in New York’s Central Park.

They have triumphed not only with the music of Jamaica but also with their own compositions of soca, the music of the Eastern Caribbean. At different times and in diverse settings, they have enchanted audiences with soul, funky, rock, jazz, disco, gospel and classical music. Their album, made with other Stage Records artistes, “Christmas In the Sun” is easily the most successful Christmas album by a Jamaican entity and the 2002 follow-up “Fab 5 – A Jamaican Christmas Gift” and 2017 addition to their Christmas Collection Christmas Card have proven just as popular.

They have dominated the Jamaican awards for show and dance bands and demonstrated their supremacy at the Jamaica Band Festival at the Wyndham New Kingston in December 1987. Their collection of major awards, by far the greatest of any entity in Jamaican music, includes twenty-nine between 1986 and 1996, from all principal sources – the JBC, RJR, the Daily Gleaner, the Star, Rockers, the Jamaica Music Industry (JAMI) and the Jamaica Federation of Musicians (JFM), among the most recent being the 1995 Rockers Award for Best Band, the 1996 award for Best Group (Instrumental) at the Jamaica Music Awards, a 1999 Tamika Award, the 2000-2002 JFM Best Show Band Awards, The Reggae Soca Awards Best Soca Band 2002-2003, a 2007 Lifetime Achievement Award from Reggae Sumfest, a 2012 JaRIA Honours Award.

The group has also won several international awards, including the 1996 awards for Best Album and Best Single (both won for “Good Buddy”) at the Miami Reggae/Soca Awards and the 1999 “Best International Reggae Album” award at the Canadian Reggae Music Awards for “Fab 5 Live – The Ultimate Vintage Jamaican Party Mix … Part 1.” Fab 5 have also won the “Best Soca Album” award at the Reggae soca Awards in Miami for their 1999 album “Shape,” thus making them the first group in history to win best album awards for reggae and soca in the same year.

In addition, the band’s musical director Grub Cooper, CD has won numerous awards in his own right, including the Order of Distinction, Commander Class (CD) 2006 (a national award of the Government of Jamaica), and a special honour award from the JFM (1988) for his outstanding contribution to the development of Jamaican music. He has also been Jamaica’s leading theatre musician for more than Four decades and a major producer of gospel music. Most recently (2017) Cooper was presented with a special Lifetime Achievement Award from the Rita Marley Foundation for his contribution to the development of Jamaican music. Mr Cooper is one of Jamaica’s most prolific songwriters, penning hits like Rita Marley’s “One Draw”, “All Night party” (a hit for Buster Point Dexter), Gem Myers’s “One Man Woman”, Roy Rayon’s “Give Thanks and Praises” as well as the majority of Fab 5’s own hits. He has arranged vocal for the I-Three on the Marley “Uprising” album, and has worked with many international acts, including, Ziggy Marley, Boy George, The Beach Boys and the Talking Heads. Mr Cooper also received a coveted Musgrave Medal (silver) from the Institute of Jamaica, which puts him in the very elite class of Jamaica’s creative artistes. Most recently he composed the band’s new single, 2018’s “Congrats Prince Harry” a well-wisher for the Prince’s nuptials.

Frankie Campbell – has also received the prestigeous OD making Fab 5 the only current Jamaican dance/show/backing band with two such awardees. Campbell also received a mentorship award from JARIA in 2013. Fab 5 have also been actively involved in keeping Jamaican music alive, with major representation on the boards of JARIA (Jamaica Reggae Industry Association), (RIAJAM) and the Jamaican Association of Vintage Artistes and Affiliates (JAVAA), which Campbell chairs. Campbell is also a board member of JAMMS (Jamaica Music Society) a performing right agency. The band also works with many charitable organizations.
Musicianship, dedication, integrity and discipline are the hallmarks of Fab 5, who have earned and retained the respect of the music industry, critics and general public over the past forty-eight years and are all set for continued success in the future. In July of 2011 their performance at the renowned “Celebrate Brooklyn” festival drew sustained applause for over 5 minutes and their performances at the Irie Fest in Toronto during Caribana have become legendary. Fab 5 may be pioneers, but they are still very much active and relevant.

The band comprises three 1970 foundation members – manager Frankie Campbell (bass); Harold (Jr) Bailey (guitar, flute and saxophone now part-time and overseas sound engineer) and; musical director Grub Cooper (drums and lead vocals), – Sidney Thorpe (keyboards), 1979; Donovan Lee Palmer (Keyboards), 1991; Andre Palmer (Trumpet) 2006; Andrew Cassanova vocals (2012) who had been working with our brother group (the Unique Vision) for over 22 years; and Cleveland Manderson , guitar and vocals (2010) who had been working with the Unique Vision for over 37 years. Other personnel performs from time to time as part of the wider Stage Records (the band’s recording company) family.