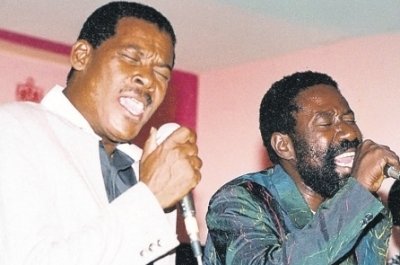 The Clarendonians were originally Fitzroy “Ernest” Wilson and Peter Austin (who would also record as part of The Soul Lads), both from Hayes in Clarendon Parish, the duo coming together in 1963. The duo won several talent contests and recorded their debut single, “A Day Will Come”, at Federal Records with producer Leslie Kong.

They came to the attention of Studio One boss and producer Clement Dodd, while they were still in their early teens. Dodd took the duo into the studio, and recorded a series of singles (including “Rudie Gone a Jail”, “Sho Be Do Be”, “Rudie Bam Bam”, “You Can’t Be Happy”, and “Darling Forever” – all chart-toppers in Jamaica, and “You Can’t Keep a Good Man Down”) that helped to define the “rude boy” era of ska, alongside the other (initially less successful) young vocal group that Dodd was working with, The Wailers. Dodd expanded the group to a trio with the addition of a seven-year-old Freddie McGregor (who had to stand on a crate to reach the microphone), although they would often still record as a duo, with McGregor and Wilson recording as Freddie & Fitzie, and McGregor and Austin recording as Freddie & Peter.

Austin became disaffected with Dodd in the late 1960s and went on to record as a solo artist for producer Ken Lack, also recording a brace of tunes for producer Phil Pratt, but failed to match the success of his colleagues. He went on to work as an aviation supervisor at Norman Manley International Airport.

Ernest Wilson was the first member to establish himself as a solo artist, with singles such as “Storybook Children” and “If I Were a Carpenter”, and briefly recorded under the name “King Shark”, and with The Techniques. He continued to be sporadically successful through to the 1990s.

McGregor took some time to establish himself as a solo artist, working at Studio One as a session drummer and backing singer, but found success with “Bobby Bobylon”, and since the late 1970s has been one of the biggest names in reggae.